Authorities in the state of Colorado have issued an evacuation order for residents near Rocky Mountain National Park as gusty winds on Saturday sparked the second largest devastating fire in the state’s history.

A red flag warning issued by the National Weather Service was in effect for the area as winds of 97 kilometers per hour and low humidity were expected until Saturday.

“We tried to stay one step ahead to get everyone out of there in an orderly fashion,” said David Moore, spokesman for the Larimer County Sheriff’s Office. “We expect a very long day. Cross your fingers and pray. “

A satellite image shows smoke from the devastating forest fire in northern Colorado [Satellite Image 2020 Maxar Technologies/Handout via Reuters]The fire, which started on October 14, was 14 percent contained as of Saturday.

As the flames spread, authorities closed all 668 square kilometers of Rocky Mountain National Park to visitors and ordered several mountain communities to be evacuated.

The fire has killed at least two people to date after an elderly couple were found dead on Friday at their home outside the town of Grand Lake, about 30 km from Estes Park.

Grand County Sheriff Brett Schroetlin said Lyle and Marilyn Hileman, both in their eighties, “refused to evacuate” and chose instead to stay in the house where they had lived for many years.

“Our parents left this world together and on their own terms. They leave a legacy of hard work and a determination to overcome – something that all of Grand County will need, “the family said in a statement read by the sheriff.

Schroetlin called the devastating fire “a catastrophic event” in the small community.

Colorado experienced the largest fires in its history this year, including massive fires in California and the Pacific Northwest.

Larry Helmerick, Fire Information Coordinator for the Rocky Mountain Area Coordination Center, told The Associated Press this week that more than 1,813 square kilometers of land have been burned in the East Troublesome Fire.

Another fire in northern Colorado that started in August and is still spreading – known as the Cameron Peak Fire – is the largest in the state’s history.

This video gives a brief glimpse of the wind conditions that we and other firefighters experienced on Cameron Peak during the #cameronpeakfire #cofire pic.twitter.com/8WDfE1reTc

As of Saturday morning, that fire was 60 percent contained and destroyed more than 207,000 acres (nearly 84,000 hectares), officials said.

Authorities in Colorado said this week there is a possibility that the Cameron Peak Fire and East Troublesome Fire could merge.

Scientists have indicated that climate change is exacerbating forest fires in the United States, along with other major climate events such as storms and droughts. 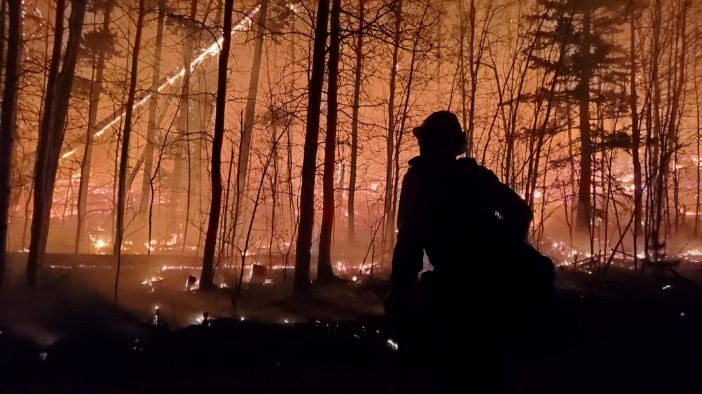 The Cameron Peak Fire, the largest devastating fire in Colorado history, destroyed more than 207,000 acres of land [Loveland Fire Rescue Authority/via Reuters]Jennifer Balch, director of the Earth Lab at the University of Colorado, Boulder, said drought had intensified the flames in the state.

She said it was “only a matter of time” before the forest fire threat affects more people who approach the forests.

“If I had a panic button, I would press it – because we have put millions of homes in the western US at risk,” Balch told the AP news agency.

Screenwriter For ‘Brian’s Tune’ And ‘Roots’ Was 83 – Deadline

COVID-19 Immunity: For How Lengthy?