Kyrgyzstan’s prime minister has resigned after widespread protests following the elections that plunged the country into political chaos.

Kubatbek Boronov has now been replaced by Sadyr Japarov, who was released from prison the day before.

In the face of mounting pressure, the country’s electoral body annulled the results of Sunday’s parliamentary elections.

The election results had resulted in parties allied with the country’s president, Sooronbai Jeenbekov, winning the largest share of the vote on charges of mass-buying votes.

President Jeenbekov is still in power but has indicated that he is ready to step down.

He had previously told the BBC that he was “ready to put strong leaders in charge” but refused to say who he had in mind.

The latest announcement came after days of chaos in which protesters seized government buildings and freed high-profile political prisoners – including Mr Japarov, who served an 11-year prison sentence seven years ago during an opposition protest for kidnapping a regional governor.

Former President Almazbek Atambayev, who was sentenced to 11 years in prison for corruption, was also released.

Parts of the parliament building in Bishkek were set on fire

Only four out of 16 political parties had passed the threshold for entry into parliament in Sunday’s elections. Three of the four had close ties with President Jeenbekov.

The President said he was ready to cancel the result before the official announcement by the Central Electoral Commission came that it had invalidated the election results “taking into account the political situation in the country”.

What did the president say?

“The main goal of the protesters was not to cancel the election results, but to remove myself from power,” President Jeenbekov told BBC Kyrgyz in an exclusive telephone interview from a secret hiding place.

He called on all parties to return to “legitimate territory” and work together to avoid the political upheavals of the past.

“To solve this problem, I am ready to put strong leaders in charge, no matter what group they belong to. I am even ready to help them,” he added.

In an earlier video address, the President accused “certain political forces” of using the election results as a cause of “violating public order”. “They disobeyed law enforcement, beat up medical workers and damaged buildings,” he said.

Observers say it appears that Mr Jeenbekov, who was elected in 2017, has lost all influence – but it is not clear who would replace him.

Opposition leaders have set up a Coordinating Council, but there are reports that they are divided and argue over who gets influential government positions.

How did the violence develop?

Around 5,000 people gathered on Monday in Ala-Too Square in the capital Bishkek to demonstrate against the election results.

The protest was largely peaceful until the evening when a smaller group broke off and tried to break through the gates into the parliament building. 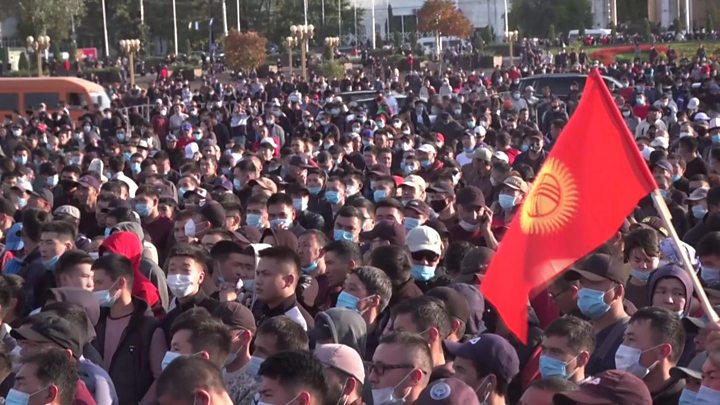 Media signatureThousands of demonstrators took to the streets in the capital, Bishkek

Police then used water cannons, stun grenades and tear gas to remove the crowd from the main square and the surrounding streets.

Protesters later flocked back to the central square before storming the parliament building known as the White House.

Video shared on social media showed opposition protesters gaining access to the complex, some by climbing fences and others by opening the main gates. Smoke could later be seen rising from the building.

The Ministry of Health said nearly 700 people were injured, nine in intensive care, and a 19-year-old man was killed.

The president’s office remained under the control of protesters on Tuesday, according to an AFP report – with crowds reportedly roaming the streets targeting businesses.

What do we know about the choice?

Of 16 parties fighting for the 120 seats in the Supreme Council, only four parties had exceeded the 7% voting limit.

The two parties Birimdik and Mekenim Kyrgyzstan, which each received a quarter of the vote, are closely linked to President Jeenbekov.

None of the established opposition parties secured a seat in parliament, and on Monday all 12 opposition groups jointly declared that they would not recognize the results of the vote.

They accused parties close to the president of buying votes and intimidating voters – claims by international observers are “credible” and cause “serious concern”.

Some observers said they saw in the first hours of the vote that some citizens with marked masks were given ballot papers filled out. There were also allegations that voters were bribed and taken to places where they could influence the outcome.

Two years faraway from their first battle, are Khabib and Conor McGregor destined to fulfill as soon as extra? — RT Sport Information

Stripchat is the primary grownup cam website to launch a…