‘Not even the pandemic’ will cease Colombia protests, leaders say | Latin America

The protesters are demanding a guaranteed income, more funds for health and education and an end to gender-based violence.

Thousands of union members, teachers, students and indigenous people will take part in a national strike in Colombia on Wednesday to protest President Ivan Duque’s social and economic policies, the murder of human rights defenders and the recent police violence.

The marches are the latest in a sporadic series of protests that began late last year, including demonstrations against police brutality in September that resulted in 13 deaths.

The government has warned that crowds pose a high risk of coronavirus infection. Colombia, which has been countrywide on lockdown for more than five months to contain the virus, is expected to top a million confirmed infections later this week.

A man wearing a mask during a native Colombian demonstration calling on the government to protect their territory, stop the assassination of social leaders, and implement a peace agreement in Bogota, Colombia [Luisa Gonzalez/Reuters]The protesters are calling for a range of government concessions, including guaranteed income for those who have lost their jobs due to the coronavirus, increased funding for health and education, and measures to combat gender-based violence.

Protest leaders, including indigenous officials, have also called for a meeting with Duque to discuss the killings of activists whose death the government attributes to criminal gangs and left-wing rebels.

“We are marching together today to negotiate an emergency petition that includes health, life, farming, the rights of women and vulnerable groups,” said union leader Diogenes Orjuela during a press briefing on Tuesday with indigenous leaders. 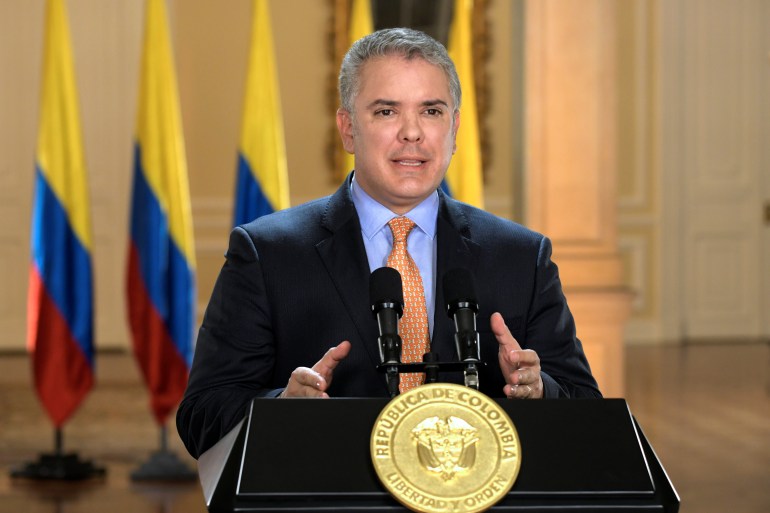 Colombian President Ivan Duque speaks in front of the country in a televised address in Bogota, Colombia, declaring a state of emergency as a preventive measure against the spread of coronavirus disease [Courtesy of Colombian Presidency/Handout via Reuters]About 10,000 indigenous people arrived in Bogota this week, mostly from the southwest of the country, and asked Duque to meet with them.

“Not even the pandemic will stop our movement,” said Hermes Pete, head of the Regional Indigenous Council of Cauca (CRIC). “There is no other way but to keep fighting.”

The crowd of marches could be “tomorrow’s outbreak,” warned Duque on his Tuesday nightly television show.

Business leaders have called for the protests to be suspended on fears that they could damage an emerging recovery after the lockdown. The government estimates the economy will contract by 5.5 percent this year.