The Thai government has declared a state of emergency to end three months of student street protests calling for reforms to the monarchy and the resignation of Prime Minister Prayuth Chan-ocha. At least 20 activists and two movement leaders were arrested early Thursday.

The ruling prohibits gatherings of five or more people and the posting of news or online messages that could compromise national security.

The protests have escalated for three months and protesters camped outside the offices of Prime Minister Prayuth Chan-ocha in the capital, Bangkok, to demand his resignation late Wednesday. The government said it also acted after protesters blocked a royal motorcade.

Videos widespread on social media showed police protecting the royal yellow vehicle from crowds who held their arms up in the three-fingered salute that has become the symbol of the democracy movement calling out their demands.

“It is extremely necessary to put in place an urgent measure to effectively and promptly end this situation and maintain peace and order,” state television said.

The announcement was accompanied by a document setting out measures that would take effect from 4 a.m. local time (9:00 p.m. GMT) that banned large gatherings and allowed authorities to prohibit people from entering an area they designated.

It also prohibits: “Posting news, other media, and electronic information that contains messages that may induce fear or intentionally misrepresent information, causing misunderstandings that harm national security or peace and order.”

After months of protests against the Bangkok government, the police were in place [Athit Perawongmetha/Reuters]Shortly afterwards, the police cleared the remaining demonstrators in front of the government building where they had camped overnight. Authorities also arrested two protest leaders, Arnon Nampa and Panupong, the Thai human rights advocate group said.

“The authorities arrested Arnon and Panupong at 5:00 am,” the rights group said, adding that Arnon was arrested for a speech he made in the northern city of Chiang Mai. The reason for Panupong’s arrest is not clear. The police made no immediate comment.

The Asia Desk of FIDH, an international human rights group, said at least 20 pro-democracy activists had been arrested.

Tens of thousands of protesters marched in front of the government building where the prime minister works in Bangkok on Wednesday.

The protest movement aims to remove Prayuth, the former army chief who took power in 2014 in a coup to end a decade of violence between supporters and opponents of the country’s establishment, and to accept his position in last year’s elections consolidate.

Those marching in the streets want a new constitution and are calling for King Maha Vajiralongkorn’s powers to be reduced – a long-standing taboo on criticizing the monarchy.

Such obvious challenges to the monarchy are unprecedented in Thailand, where the influence of the royal family permeates every aspect of society and has sparked a backlash from Thailand’s decidedly pro-royalist establishment.

#WhatHappeningInThailand
The royal motorcade carried by Queen Suthida and Prince Dipangkorn was carefully pushed by a crowd of demonstrators, who saluted three fingers and shouted slogans in response.

Hours later, the Thai Prime Minister ordered the authorities to prosecute her.

“We have started to talk about it more than ever,” said Al Jazeera’s Scott Heidler, reporting from outside the government house. “But it is one thing to see people on the streets calling for this reform and quite another to see it actually happen.”

Tensions around the royal motorcade increased on Wednesday when people in yellow shirts also gathered to symbolize their support for the monarchy. Around 15,000 police officers were deployed.

“The monarchy has existed for more than 700 years,” said Sirilak Kasemsawat, one of thousands of royal supporters waiting to “show that we love the king”.

Government spokesman Anucha Burapachaisri announced late Wednesday that the Prime Minister had ordered the police to bring charges against “the demonstrators who obstructed the royal motorcade”.

Charges are also being brought against “those who acted in ways that defamed the monarchy,” he said in a statement. 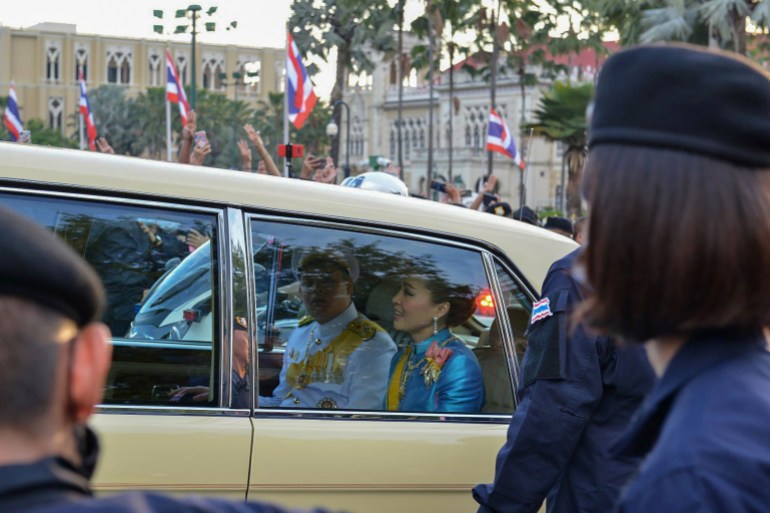 Thailand’s Queen Suthida and Prince Dipangkorn Rasmijoti in a royal motorcade as anti-government protesters hold their arms up in a three-finger salute [Teera Noisakran/AFP]Several popular anti-government movements have sprung up during Thailand’s turbulent modern history, which has seen long political turmoil since 1932 and more than a dozen successful military coups.

The army has long positioned itself as the sole defender of the ultra-rich king, who spends most of his time in Germany, but whose power extends across all facets of Thai society.

Activists have repeatedly said they just want the monarchy to adapt to modern times.

Their demands include the abolition of a strict royal defamation law that protects the king from criticism, and the demand for the monarch to stay out of politics.

“We are just asking them to change with us,” protester Dear Thatcha told the AFP news agency.

Since the movement began in July, dozens of anti-government activists have been arrested, charged with sedition and released on bail.