Coronavirus deaths in the United States exceeded 210,000 when President Donald Trump said he was leaving the military hospital where he was treated for the disease – four weeks before the US election.

Trump said he felt fine and the nation shouldn’t be afraid of the virus.

“I’m leaving the large Walter Reed Medical Center at 6:30 pm today,” Trump tweeted on Monday. “I feel really good! Do not be afraid of Covid. … I feel better than 20 years ago! “

I’m leaving the large Walter Reed Medical Center today at 6:30 p.m. I feel really good! Do not be afraid of Covid. Don’t let it dominate your life. We have developed some really great drugs and knowledge under the Trump administration. I feel better than 20 years ago!

Trump’s doctor said the president met or exceeded all standard hospital discharge criteria and although he was not out of the woods, he was able to go home.

“In the past 24 hours … he has met or exceeded all standard hospital discharge criteria,” said Dr. Sean Conley at a press conference and said it had been more than 72 hours since Trump’s last fever and that his oxygen levels were normal.

“While he may not be completely out of the woods just yet, the team and I agree that all of our evaluations, and especially his clinical status, support the President’s safe return home, where he will be surrounded by world-class medical care 24 / 7. ”

Campaign turned on its head

Trump’s announcement of his diagnosis landed like a bomb on Friday, just over 48 hours after his first presidential debate with Democratic challenger Joe Biden, highlighting the uncertainty that marked an extremely unusual campaign during a deadly pandemic.

Trump has often downplayed the threat posed by COVID-19, which has now infected 7.4 million Americans. In the past few days, he posted a series of videos to reassure the public that he is recovering from the illness caused by the virus.

On Monday morning, his Twitter account posted a stream of more than a dozen messages urging Americans to vote for him in the November 3rd election, including posts that read “LAW & ORDER. VOTE! “And” RELIGIOUS FREEDOM. VOTE! “

The scale of the coronavirus outbreak at the White House grew on Monday when Trump’s press secretary Kayleigh McEnany said she had tested positive for the virus every day since Thursday after having “tested negative negative” every day.

McEnany, a prominent figure at the forefront of the White House’s often combative handling of the media, held a briefing for reporters on Thursday when she was not wearing a face mask.

“I will not recommend or allow any New York family to send their child to a school that I would not send my child,” Cuomo said at a press conference.

He said the state will take over enforcement of social distancing rules from local authorities in hot spots.

Cuomo and de Blasio have repeatedly argued over how to respond to the spread of COVID-19, and the two have not appeared in public together in many months. Cuomo said he spoke to the mayor by phone earlier Monday.

De Blasio said Sunday that beyond schools, he also wanted the state’s blessing to close non-essential stores and even stop outdoor dining in those areas.

Cuomo said he did not agree and criticized the mayor’s decision to demarcate affected districts using zip codes. He added that he has not yet decided which approach could be better. 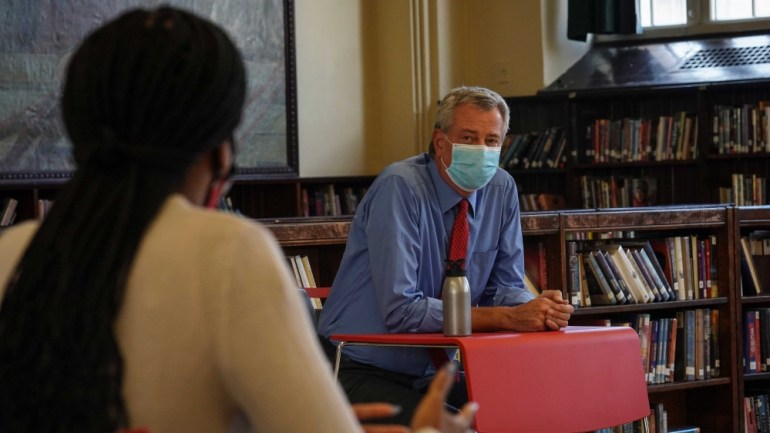 “I think it goes way beyond enforcement,” he told CNN on Monday. “I think here is one case where we need to really work hard with communities and community leaders to make a major turn in the way people deal with things.”

New York faced one of the earliest and most devastating outbreaks of the novel coronavirus in the spring, but has since managed to largely contain its spread.

Also on Monday, the U.S. Centers for Disease Control and Prevention (CDC) updated their guidelines that COVID-19 can sometimes be spread through airborne transmission.

It is said that some infections can be transmitted through exposure to the virus in small droplets and particles, or aerosols, that can linger in the air for minutes to hours.

Last month, the CDC released its guidelines on possible airborne transmission of the novel coronavirus and then recorded them.

Meanwhile, Biden said Monday he was ready to join the scheduled debate with Trump next week as long as health experts say it is safe. 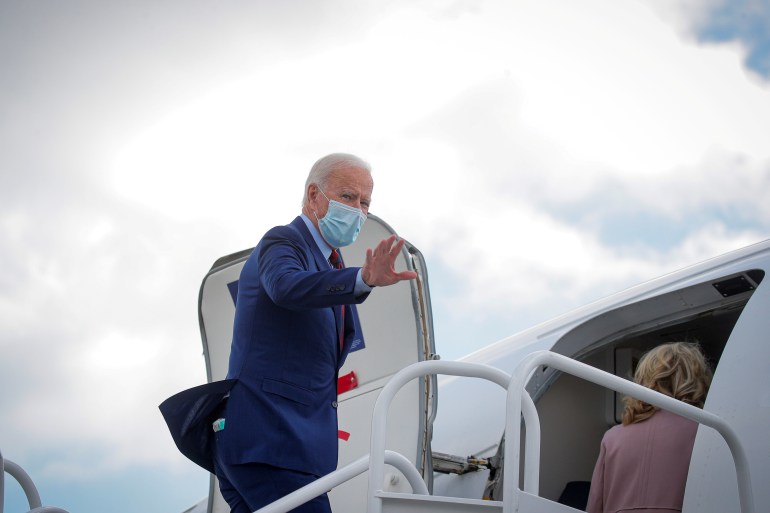 “If the scientists say it’s safe and the distances are safe, then I think that’s fine. I’ll do whatever the experts think is appropriate, “Biden, who tested negative for COVID-19 over the weekend, told reporters in Delaware before setting off on a campaign trip to Florida. 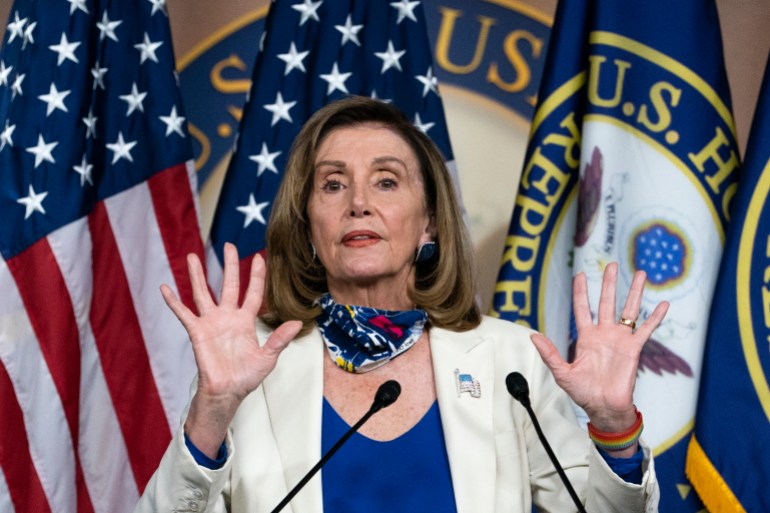 House Speaker Nancy Pelosi speaks during a weekly press conference on Capitol Hill in Washington [AP Photo/Jacquelyn Martin]On Monday, US House spokeswoman Nancy Pelosi and Treasury Secretary Steven Mnuchin spoke by phone about coronavirus economic relief for about an hour and prepared to speak again Tuesday to continue their recent activities, the work towards an agreement on legislation.

“The two discussed the justifications for different numbers and plan to swap papers today in preparation for another call tomorrow,” wrote Pelosis spokesman Drew Hammill on Twitter.

Spokesman Pelosi and Secretary Mnuchin spoke by phone for approximately 1 hour today at 11:30 am. The two discussed the justifications for different numbers and plan to swap papers today in preparation for another call tomorrow.

Congressional renewed efforts to reach an agreement to pump coronavirus aid into the pandemic-hit economy were compounded by news last week that three Senate Republicans tested positive for the disease.

The news of the Senators prompted Senate Majority Leader Mitch McConnell to announce over the weekend that the Chamber would be closed until October 19, suggesting that after a week of talks between Pelosi and Mnuchin, he would not find an impending deal looked over the bill. The house is out too.